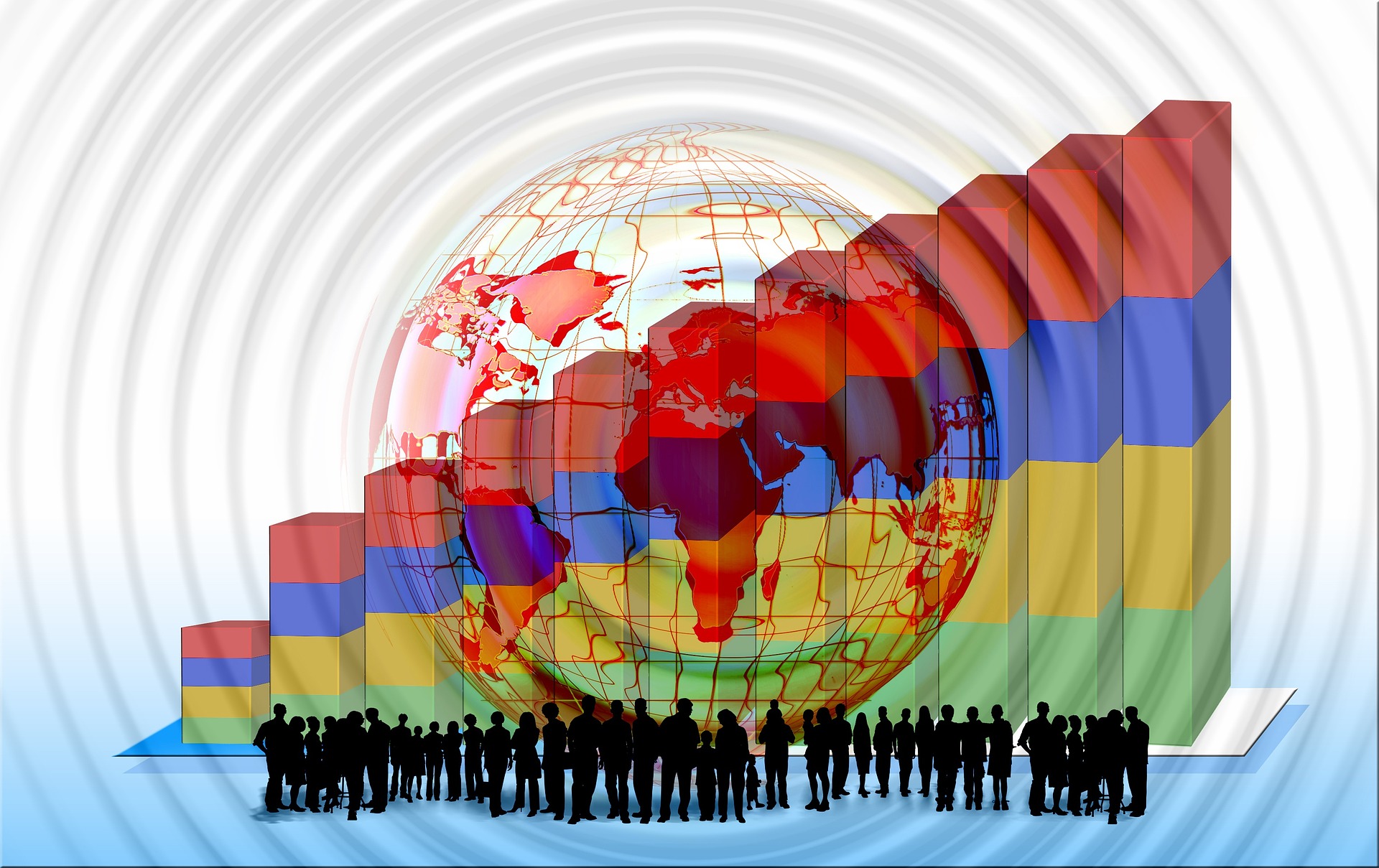 DevOps is seen to be an influential trend with many CIO’s looking to leverage the new development methodology in order to acquire the benefits it claims to bring to the wider organisation.

This trend is seen in posts from key influential practitioners such as Forbes, Gartner, Forrester to name but a few, all showing an increased energy in the need to get involved, follow the market leaders and get to grips with this new methodology.

Furthermore academic resources such as the well known Scopus containing the largest abstract and citation database of peer reviewed literature shows an increased interest in the topic by way of a heightened increase in conference offerings, press and formal articles being drafted. The pie graphs below drafted from information in Scopus give us a view that the DevOps practice is not limited to the field of Information Systems or Computer and Social Sciences – although they make up the dominant part of the activity (seen in documents drafted by area).  If we look at documents by type, it is noted to be primarily made up of conference papers which makes sense as a new methodology becomes established by going through a series of ‘sales’ rounds and exposure through the form of formal conferences and round table events (seen in the documents by type). 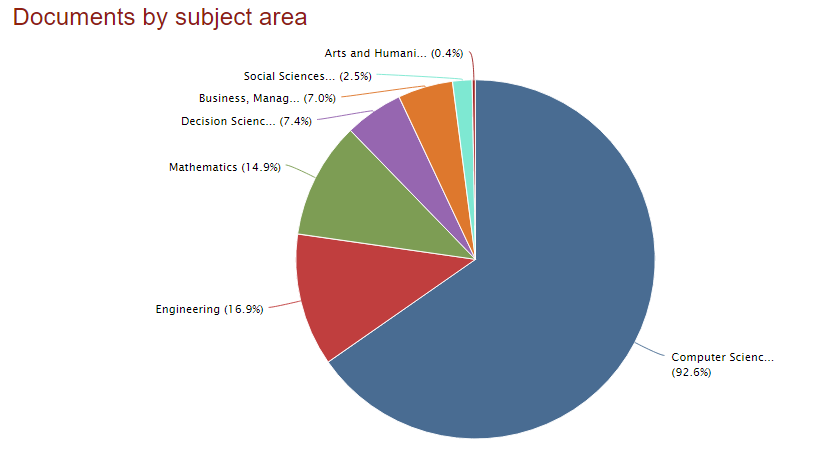 Documents by Subject Area – Not only Computer Science Involved. 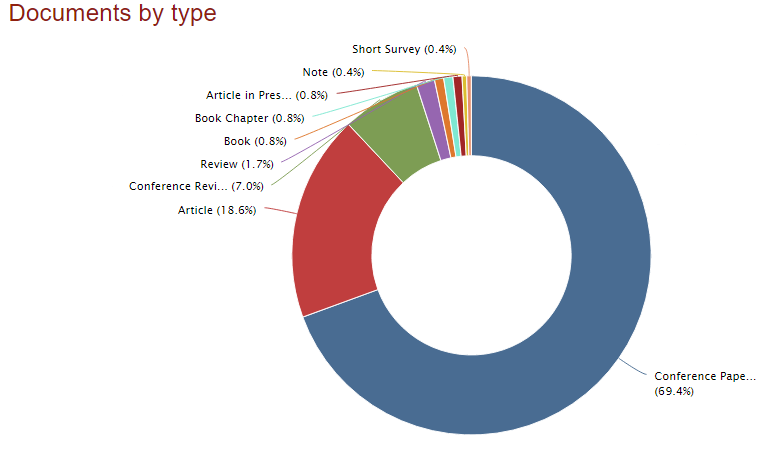 Documents by Type – Conference events leading the way to disseminate the trend!

Moreover the papers being written stem primarily from the U.S.A. and top 50 journals, IEEE, are now starting to catch onto the trend and are ramping up with the output of formal articles on DevOps – as seen in the next two graphics: 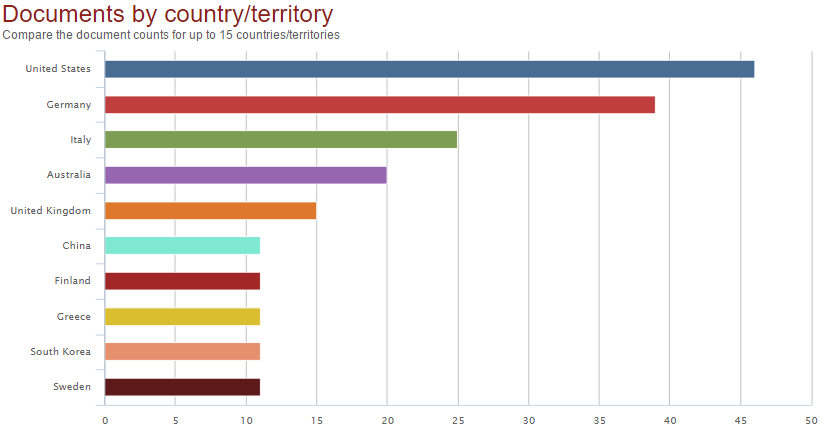 Documents by Country with USA leading the way 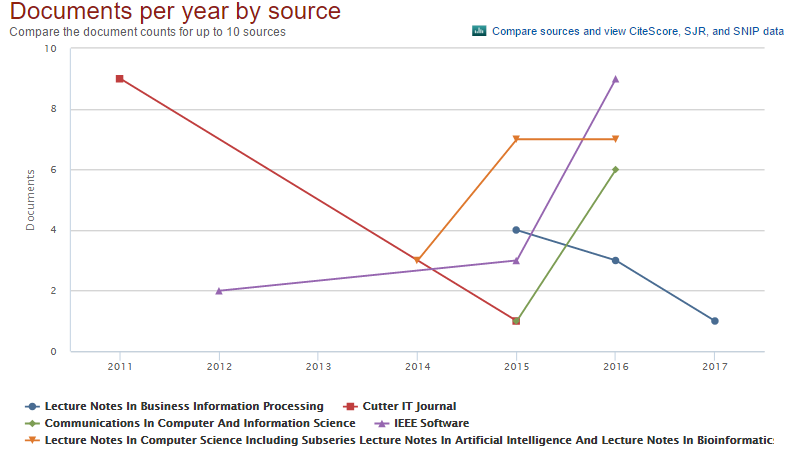 Documents by Source – IEEE coming to the fore 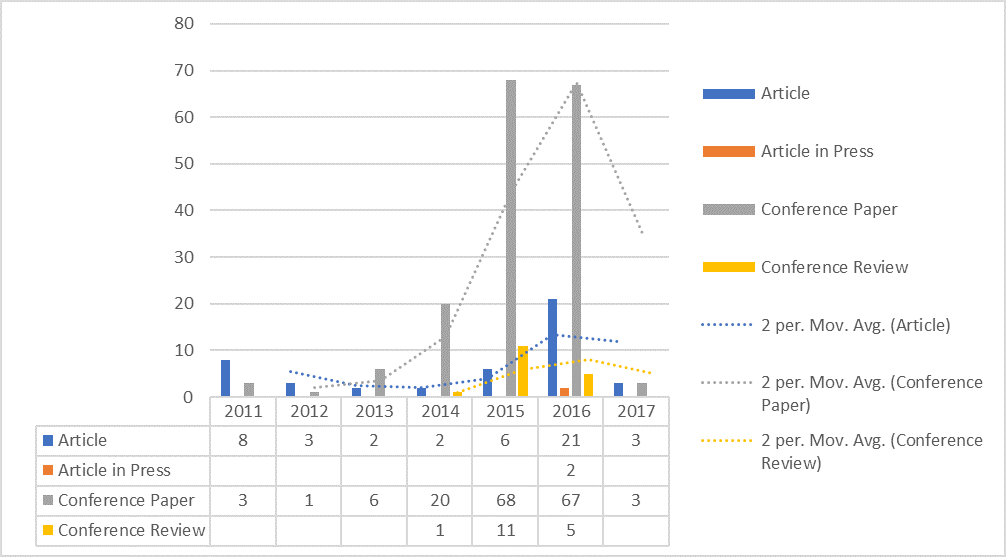 To highlight further optics on the topic, I have found a few interesting posts noting how this trend is being influenced from well known industry practitioners such as Forbes, Forrester, Gartner.

A blog post done for Forbes in late November 2016 by Steve Andriole, denoted the move for CIO’s to “get Smart(er)” by embracing DevOps and doubling efforts behind it to reap rewards.

A recent blog post from Forrester, March 2017, speaks to DevOps being one of the most powerful weapons in a CIO’s arsenal and goes on to give examples of well known companies such as Walmart, Netflix, Capital One who have embarked on the DevOps journey.

An August 2016 post from DevOps Online summarised the Gartner views on increased expenditure in the Application Release Automation (ARA) sphere of toolsets imperative for DevOps enablement as growing from $20 Million in 2010 to a mammoth $219 Million last year alone! 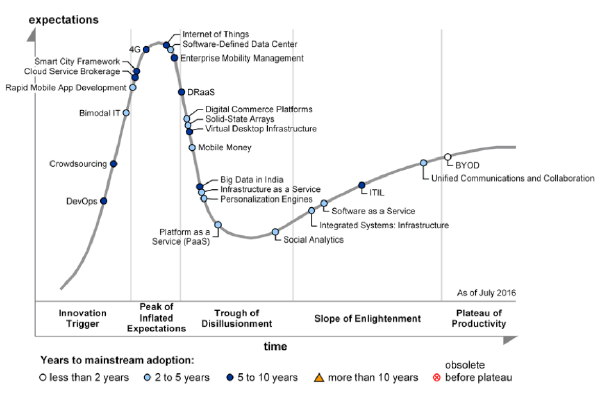 Further to note is that Gartner Hype Cycle places DevOps in its Innovation trigger stage – at the entry of it to still reach the peak of inflated expectations. Right now companies are rallying to understand DevOps and the vendors are packaging products to address all stages in the DevOps life cycle so one need to be aware of this on entering into implementation of DevOps as new tools may become available soon – so be open to the potential benefits new tools coming along may provide you in your journey to DevOps.

With all this being said, there is a marked increase in the interest and developments in undertaking and implementing the DevOps methodology. Have you considered the method yet and do you know what it entails to make it a success or do you think this fad will simply die out? Let me know your thoughts!

Not available publicly for online reference – the pie charts and Pivot Graphs used in this blog depicts the increase in interest in DevOps.

What methodology is competing with Dev Ops and are we likely to see Dev Ops being a leading methodology anytime soon?

Hi Sidima – good questions – in my view i would say that DevOps is still the new kid on the block in comparison with the more established methods of Agile, Lean and Scum methods including Kanban. The state of DevOps report by puppet, a leading organisation in DevOps, stated that in 2016 there has only been a 22% uptake in starting DevOps terams. THis was a survey done with 25000 respondents – check out the report here if you interested: https://puppet.com/resources/whitepaper/2016-state-of-devops-report. A neat view on the methods i spoke to here can be found on this blog: https://realtimeboard.com/blog/choose-between-agile-lean-scrum-kanban/.

Given that Devops is not a methodology but an approach, I see it leveraging and not competing with the existing methodologies while trying to bridge the gap between different IT teams through culture change in terms of managing the software development lifecycle.

Jimmie – this is a very good point indeed and your view is valid. It will in time establish itself i believe into a form of methodology – but it would take more published literature and upward trend in formal process to become one.